Switch to the dark mode that's kinder on your eyes at night time.

Switch to the light mode that's kinder on your eyes at day time.

Elon Musk and Jeff Bezos, two of the world's most prominent CEOs, have had a simmering rivalry for the last 15 years.

The two executives have sparred over their respective space ambitions — Musk runs SpaceX, while Bezos owns Blue Origin — but it hasn't stopped there: Musk has called Bezos a copycat over Amazon's satellite plans, as well as criticized the company's business practices. In response, both Amazon and Blue Origin have filed formal protests and lawsuits regarding SpaceX-related issues.

Musk and Bezos are two of the world's most powerful executives. Bezos is the world's wealthiest person and recently stepped down as CEO of Amazon's sprawling empire; at the same time, he's becoming more involved than ever in Blue Origin, even taking a ride on one of his own rockets. Musk, for his part, is a dual CEO, steering the ship at both Tesla and SpaceX.

Their not-so-subtle rivalry has even led to Twitter spats and name-calling — and things only appear to be getting worse.

Here's how Musk and Bezos' feud began, and what's happened since. 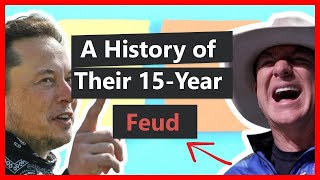 Hi, I'm Robert. How's everything? I'm a life coach with a humble start. When I was a little child, my family was living in government-subsidized housing and I remember that cereals with cold water were the only food on our breakfast menu. The shame of being a poor kid affected me during my entire childhood. I never dreamed I would own a business and have a beautiful family. However, the hardship in my childhood motivated me to become the success I'm today. I launched this website to share with you my real-world life experience, my shortcut to becoming financially independent and my relationship with Lord.
More about Me
Tools I Use

Hi, it’s me, your favorite life coach Robert Fleeman. I launched this site to share with my fellow readers the ideas, skills and tools you can learn to improve your life, career, health and relationship. I hope my articles can help somehow with the next important decision you make in your life. Always, it is your encouragement and feedback that keeps me writing.

Back to Top
Close
Robert Fleeman

We are often influenced by outside factors, and some of them are the ones we cannot see. It is the human nature to want a better life, but are we aware of the things that make it better?

Every aspect of life is interlinked and interdependent. For example, bad relationships will tear down your career, having poor health will impact everything else in life, and so on.

I do not spam people!